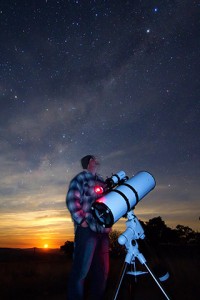 One of my fondest memories as a kid growing up in Australia is of being taken to the outskirts of my home town in 1986 at the age of seven to witness Halley’s Comet. This once every 75-76 year event was the first time that I can recall gazing up and being captivated by the night sky.

Over the years I slowly developed an interest in both photography and astronomy. A camera of some description was never too far away from me after I got my first taste for photography during my school days. Exploring the whole process of composing and shooting the scene, through to developing the film and making the prints in the darkroom really struck a chord with me, but I decided to pursue other interests at that time for my higher education and career path.

This was also the case with my interest in astronomy.

Whilst I loved going out from time to time and viewing the night sky for events like lunar eclipses, meteor showers and other comets, I never really took it too seriously. All that changed in the first half of 2010, when my interests in photography and astronomy came together one fateful night.

It was about a month after I had bought my first DSLR camera that I thought to myself: “What would happen if I held the shutter button down for a long time? Would I capture a few stars?” Living on a rural property well away from any built up areas at the time meant I did not have to worry about any light pollution, so I just went out the nearest door with my camera and did just that. 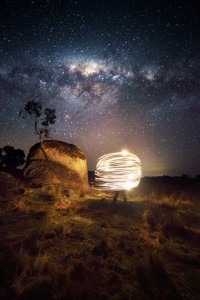 After about a minute my finger started to twitch so I released the shutter button and not expecting much looked at the result on the LCD screen. By sheer coincidence the central bulge of The Milky Way was rising on the same horizon I was pointed at and the resulting image, while technically flawed in many regards, blew my mind. Of course I had seen many photographs of the night sky and the objects within it taken by other people before, but up until that point I had not thought about how those beautiful images had been taken, or if I had, I just thought that they were all done with something like the Hubble Space Telescope. Yet here on the back of my camera was proof that you didn’t need much equipment at all to take photos of the night sky. I was instantly hooked and I wanted to learn as much as I could.

I started by reading as much as I could and getting in contact with people already doing astrophotography and absorbing any knowledge they cared to part with. I joined my local astronomy club, signed up to forums and subscribed to astronomy magazines. I experimented widely with just my camera and tripod to find the right settings for what I wanted to achieve. It was not long before the desire to take my astrophotography to the next level became too great and I started to investigate purchasing a telescope. I did not rush out and buy the first one I could find. I took the time to do a lot of research and considered exactly what I wanted to do with it. When I finally took the plunge almost a year to the day after taking my first night sky shot, I knew that I had a good setup and I would be up and running with a minimum of fuss because I had taken the time to do the research.

I love experimenting with deep sky images of things like nebulas, star clusters and other galaxies. I hope to one day soon have a permanent observatory setup which would make capturing those sort of images easier. But for me my real passion in astrophotography is doing what made me fall in love with this hobby in the first place. Using nothing more than a simple tripod and camera to capture the beauty of the night sky that surrounds us all. A meteor or comet blazing across the sky; the Milky Way stretching overhead; or the stars that appear to swirl around us as we rotate through space. I love to capture it all.

I hope that through my hobby of photographing the night sky I can inspire you to get away from artificial lights and just look up at the night sky. Halley’s Comet will return to our skies in 2061. Keep an eye out for an 82 year old man standing next to a camera on a tripod with a huge smile on his face.